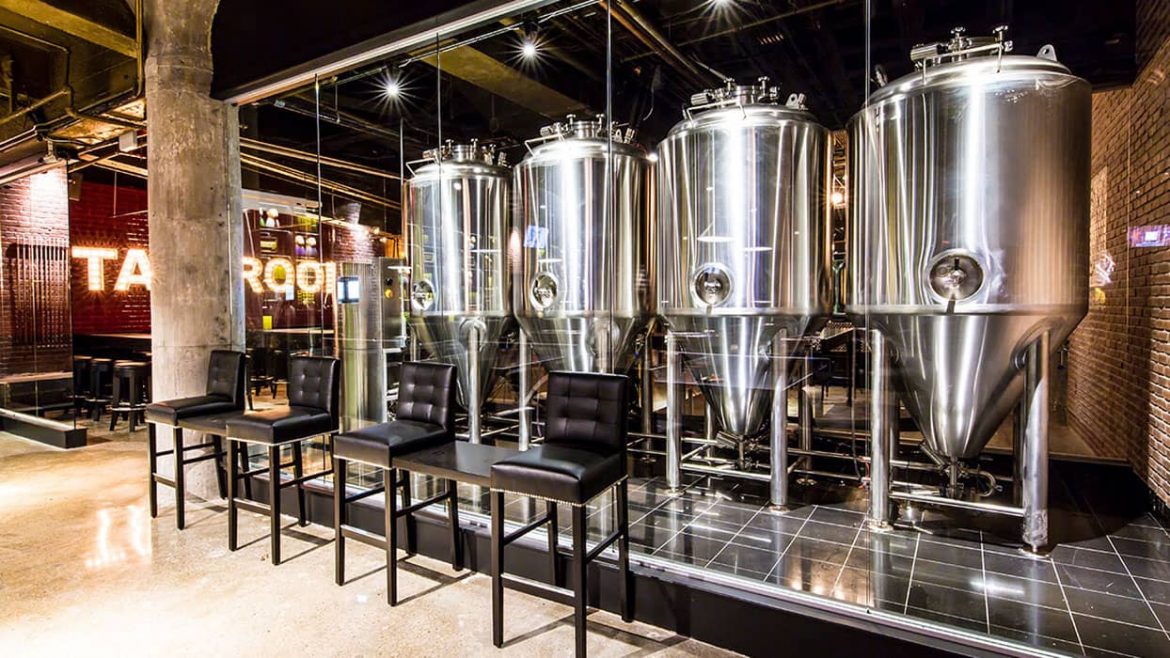 We operate a 5BBL (1 Brewer’s Barrel = 36 gallons) self built plant out of our premises on Hempshaw Lane. All of our beers are made by hand, with the only automation being two pumps to pump the hot liquids to the different vessels.

The first stage in the brewing process is called the mash. Water is heated to around 77°C and mixed into the grain bill, which lowers the temperature to the required level – different mashing temperatures affect the outcome of the beer so the brewer adjusts the water temperature in the mash tun to create the desired effects. The process of mashing activates the enzymes in the malted barley so that they can break down the starches in the malt and turn them into fermentable sugars. This process usually takes around 60 – 90 minutes.

Once the mashing has taken place the sweet, coloured ‘wort’ is transferred to the boiler. Here the wort is brought up to the boil and the hops added at various times. This process does a number of things – the temperature sterilises the liquid to get rid of any bacterias that might be present, it concentrates the wort and drives off any undesirable minerals from the water source. It also extracts the bitter acids from the hops, which act as preservatives, extending the life of the beer. We usually boil for 60 minutes, but may vary the boil length in order to get a more concentrated wort.

When the boil is over the wort then needs to be cooled quickly and transferred into a clean, sterilised fermenting vessel. The cooling process is done by a plate heat exchanger, with the hot excess water being collected for the next brew. The yeast is then pitched into the cooled wort. Ale yeast is happiest between 18°C and 24°C – any lower and it won’t eat as much sugar, any higher and it will impart undesirable flavours.

The yeast is left to its own devices to convert the sugars in the wort into alcohol and carbon dioxide whilst we keep a close eye on how it is doing, taking fresh yeast from the top of the fermenting vessel ready to use for the next brew. We dry hop certain beers in the fermentation vessel with pelletised hops when the gravity of the beer drops below a certain level, to give a big hop aroma. Once fermentation has taken place we chill the beer to 5 degrees c for 24 hours in order to drop the yeast out.

If the beer is going into cask we sometimes add a very small amount of finings to the cask, which helps the beer to clear once it is at the pub. Unfortunately these finings are not vegetarian friendly, but all the beer which goes into bottles and kegs does not have contact with these finings and so all of our kegged and bottled beers are suitable for vegetarians and vegans. We do, however, judge if a beer needs these finings and sometimes they do not. If this is the case we cask our beers unfined, and will label the cask as being suitable for vegans and vegetarians. If this is important for you, please ask the publican or bar staff to check the cask for this label – we will be displaying this information on pump clips very soon but pump clips can be lost at pubs, so the cask label is the best place to check for this. 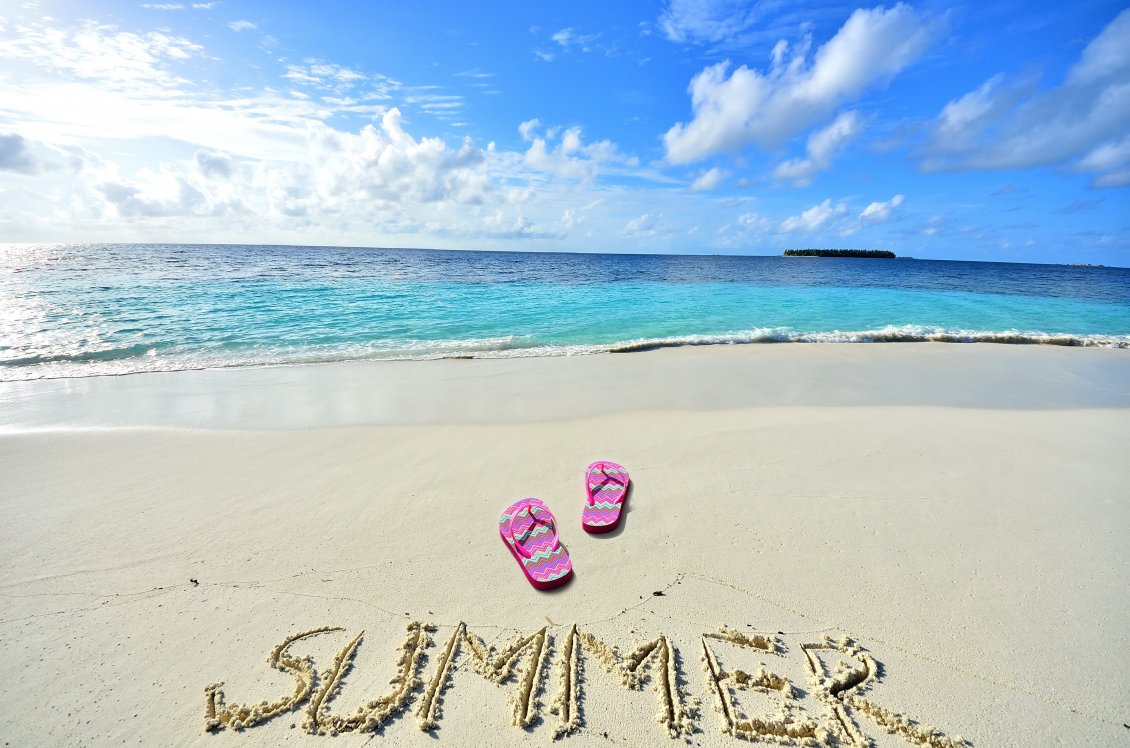 Finally! Summer is upon us!

Andy & Harriet’s Apricot Amber is now out and about around Manchester and Stockport (and also one gone to All Gates brewery for their beer festival), so keep an eye out and let me know what you think. This was brewed in April for my friends Andy and Harriet’s wedding, with help from them on the actual day. It’s a 4.6% amber beer into which I shoved a load of apricots!

The beer crew from the ace Font Bar also came down and brewed a special version of Pale Ale with me a few weeks ago, this has now gone in cask and is especially for the Eurocultured festival. It’s all Euro hops and dry hopped with loads of Saaz and Celeia, check it out if it’s on.

Beers going to Stockport Beer and Cider Festival next week are: Stout, AAA, the Apricot Amber, and the only ever cask of SK1 – the barleywine that I made with Col from Black Isle in August last year. It has been sat quietly on its own in a corner of the brewery since then, gathering dust and cobwebs and doing its own thing. Can’t wait to try it!

Bottle sales of Pale Ale have gone down an absolute storm, so much so that I reckon I’ll have to bottled most of the most recent brew just to keep up with demand. Well, with the recent weather, nothing can really beat a crisp, pale, citrussy beer in the garden, can it?

But – don’t forget to support your local pub this summer! 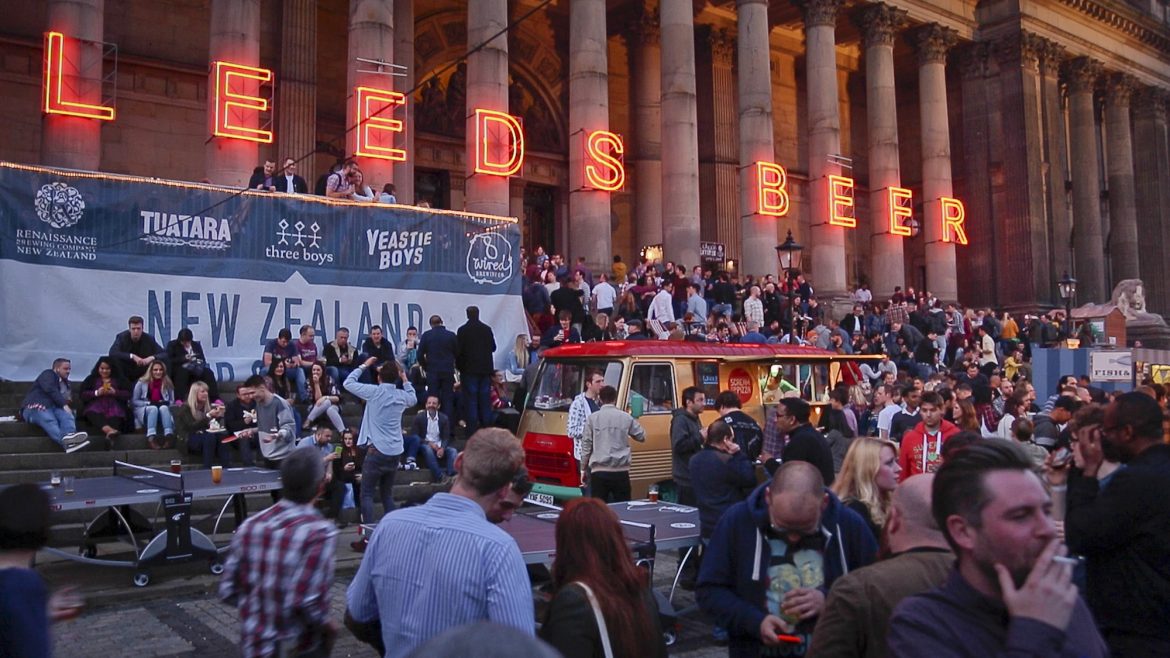 Leeds Beer Festival, IMBC 2012, and the months ahead…﻿

So it’s all been go here, with some upgrades to the brewhouse we’ll be brewing a lot more beer and some higher abv stuff destined for bottles. Sales have been shooting up and general demand is growing which is all good – so thanks to everyone who has been drinking the beers and getting the word out. Us small micros wouldn’t survive without you.

Some updates on the beer front:

Pumpkin Ale will be making its return for October, so keep an eye out for it, as soon as the pumpkins are harvested it’ll get brewed! Not much change to be made this year, maybe a few more spices in the beer but I was pretty happy with the last batch.

Imperial Breakfast Stout will be getting brewed this month and will be aged for Christmas/New Year. More details will be released for this nearer the time as I’m keeping quiet on the full recipe for the time being!

Imperial Cranberry Stout will also be brewed due to the popularity of it last year. This time loads more cranberries are going in it.

Beer will be going over to the inaugural Leeds International Beer Festival which starts this week and promises to be very good. I will be pouring my beers on Friday night and Saturday afternoon sessions so I hope to see you there.

Plans afoot for IMBC 2012 – There’ll be some core range stuff modified for it and an extra special collaboration between myself, North Tea Power and IMBC organisers which is a bit of a secret. This festival looks to be exceptionally good, and I of course will be in attendance and may be behind the bar at some point…

Beers are being provided for Didsbury Beer Festival from 1st – 3rd November, as yet undecided what they’ll go for but should be good as always.

Collaborations this month with Bitches Brewing Co., Marble, Rob from Hand Drawn Monkey Beer Shop, Huddersfield, Tom at The Pied Bull, Chester and, of course, Colin from Black Isle Brewery to create what will be SK2.

I think that’s about it – a busy September ahead, excellent. Best get to it! 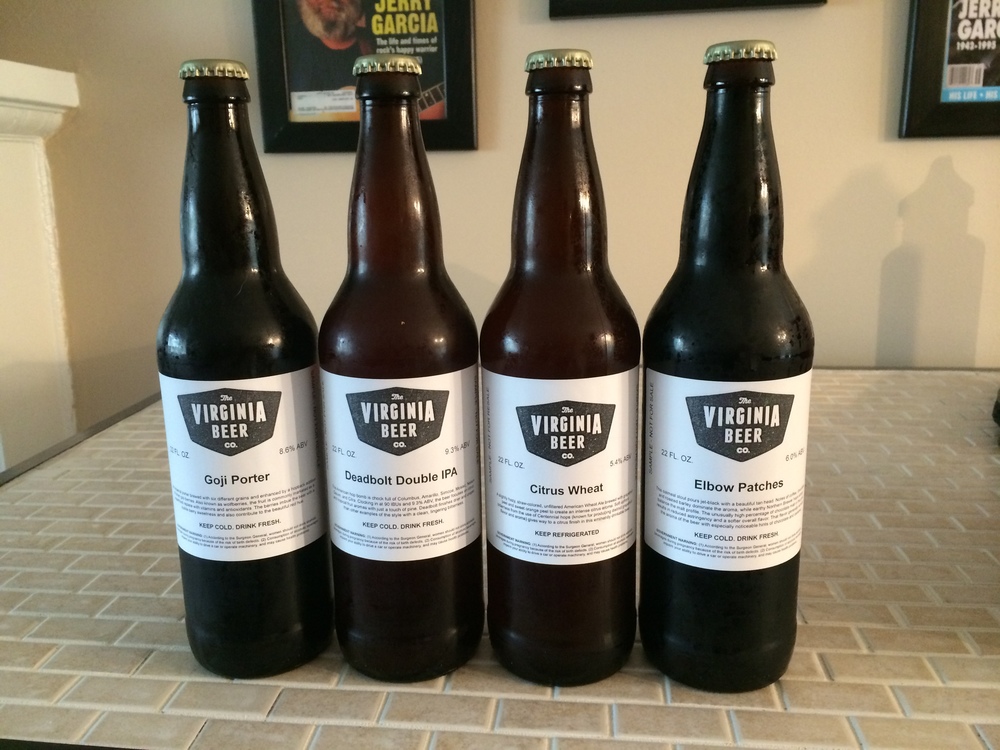 In my last post I was excited about the upcoming prospect of being at IMBC, and it definitely lived up to the expectations I had. I’d been to Victoria Baths many times before, but never have I seen it so full of people and activity. It was fantastic to witness. Then there was the beer list – enough to satisfy all cravings from light to dark, sweet to sour, UK to foreign, session to strong and every other combination I can’t think of – it was brilliantly put together and, on the whole, served very well (barring some slightly ((SLIGHTLY)) warm cask). The best thing about it for me was the variety of people there. Casual drinkers, hipsters, keg fans, cask stalwarts, students, oldies, brewers, bar owners, pub landlords – you name it – all getting along and having a jolly good time of it whatever dispense method they were drinking from, and this, personally, is the best thing about the festival. It wasn’t a war between cask-vs-keg or any of that nonsense but it was a celebration of ‘good’ beer (‘good’ being a subjective and woolly term) and all that goes with it. Beer should be, and is, wholly and utterly inclusive to everyone, and events like IMBC and Leeds International Beer Festival showed this in bucketloads. Jonny, Will, Dunk, Claudia et al, well done!

Before I start getting emotional, I’ll tell you about some new beer I’ve got coming out. First up is the India Pale Ale, which has had its abv fluffed up to 7.0%. It’s still a Pale and UK Munich malt base, and the hops have largely stayed the same – Columbus, Cascade, WGV, Magnum, Galaxy – but the slightly higher strength means there’s a lot more to back up all those fantastic hops. It’ll be available in cask, keg and bottle in the usual places.

Next up is the Pumpkin Ale, which is now a bit of a tradition in my brewing calendar, having been a homebrew recipe from a few years ago. 40kg of pumpkin was chopped up and put into a mash of Pale, Amber, Crystal and Munich to add more amber to an already amber malt base. Bitterness was kept low with just a smatter of Magnum and Stella to offset the spiciness of the cinnamon, nutmeg and black pepper that was added to steep at the end of the boil. This beer pretty much sold out before I made it.

Finally, with Colin down from Black Isle for a couple of weeks, we thought it only fair that we make SK2. Pale malt, wheat malt and a bag of VERY finely milled Cara-Pils (Cara-dust more like) went into the mash, with lots and lots of Summit, Kohatu, Chinook, Cascade and Bramling Cross added to the boil means this Double IPA should top out at around 8.0-8.3%. Some of it may even go into a couple of barrels for ageing, but the ‘straight’ version will be around very soon as it’ll be best drunk fresh.